REVEALED: What Brits are really getting up to in the bathroom

We unlock the secrets of the UK’s love affair with the shower.

Most Brits (62%) bathe or shower at least once a day, and in the shower Brits spend on average between 7-8 minutes – but there’s more than just washing going on while we’re in there. We reveal all in our latest UK shower habits survey. 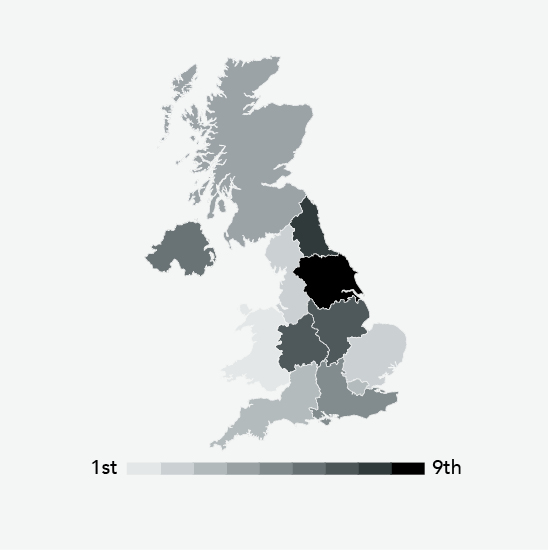 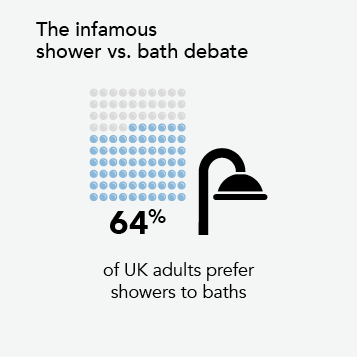 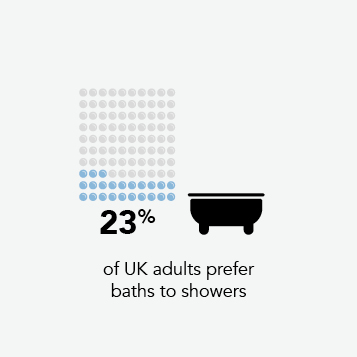 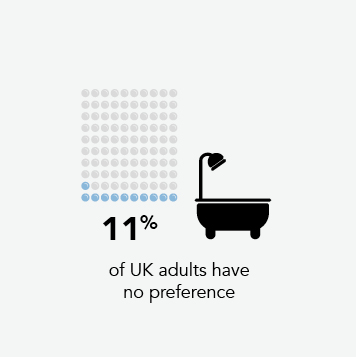 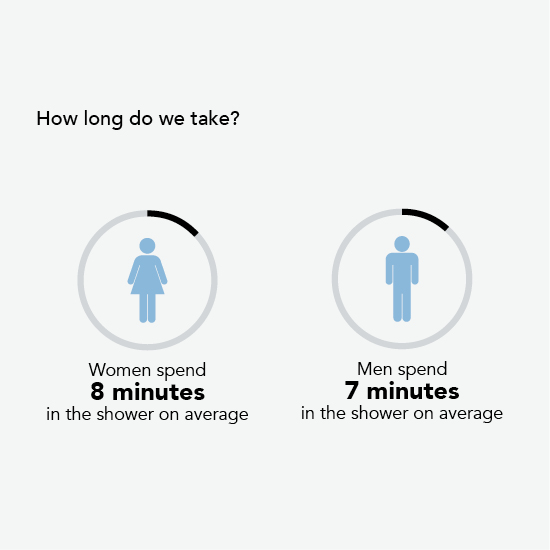 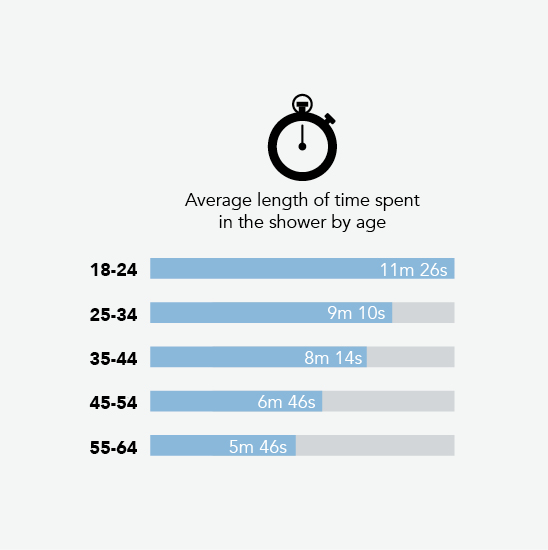 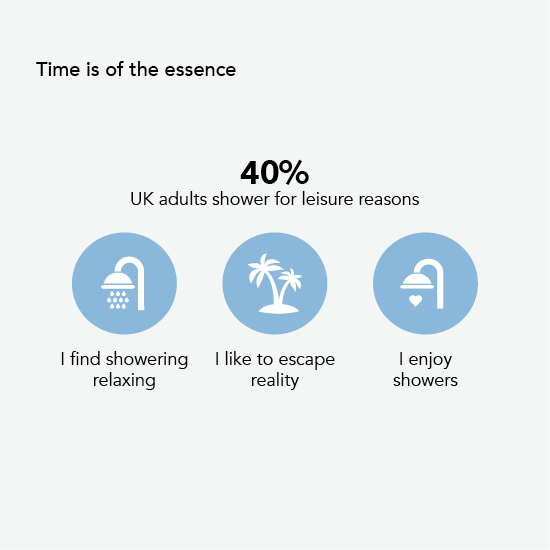 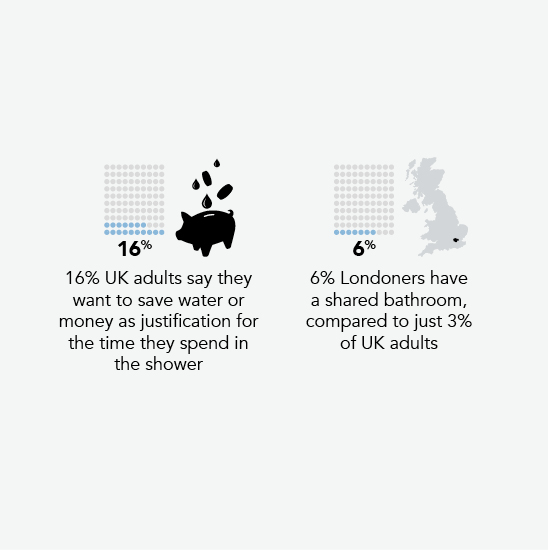 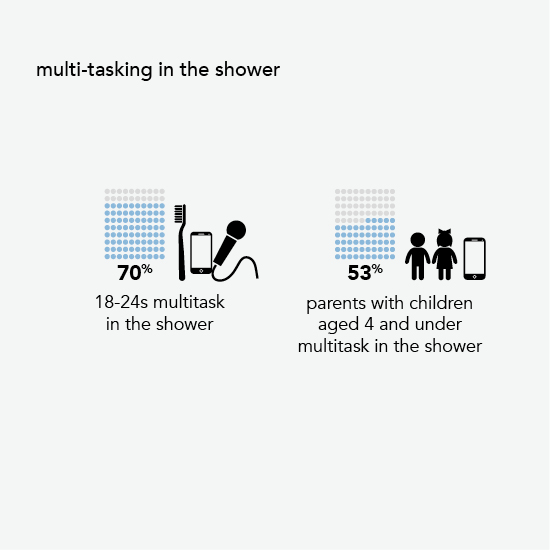 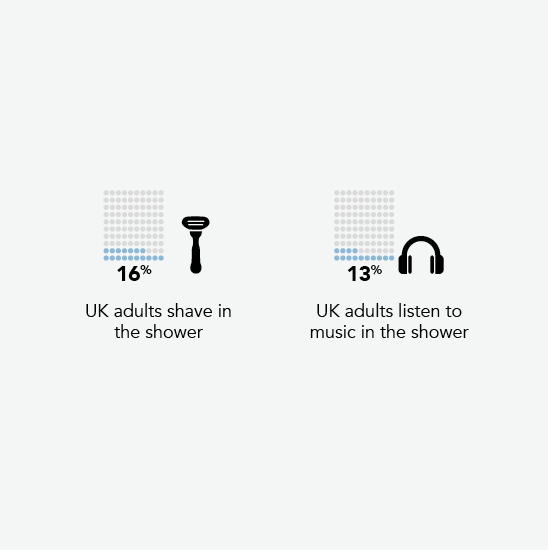 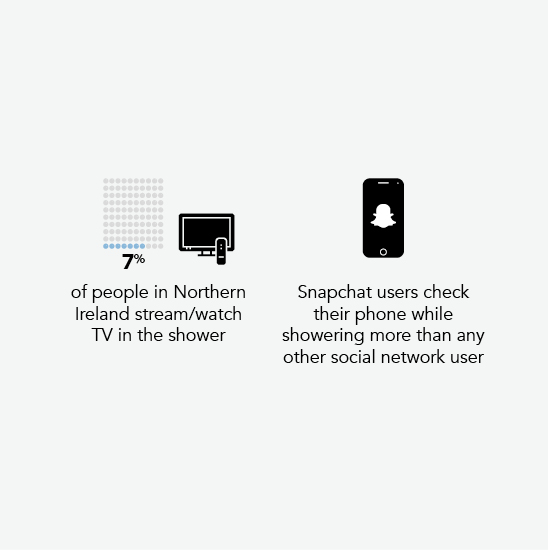 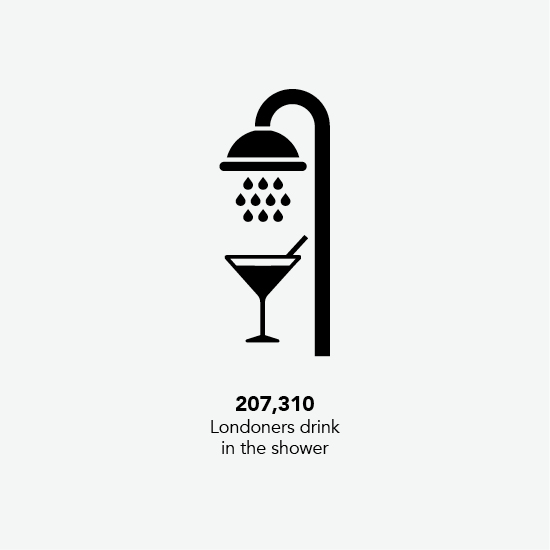 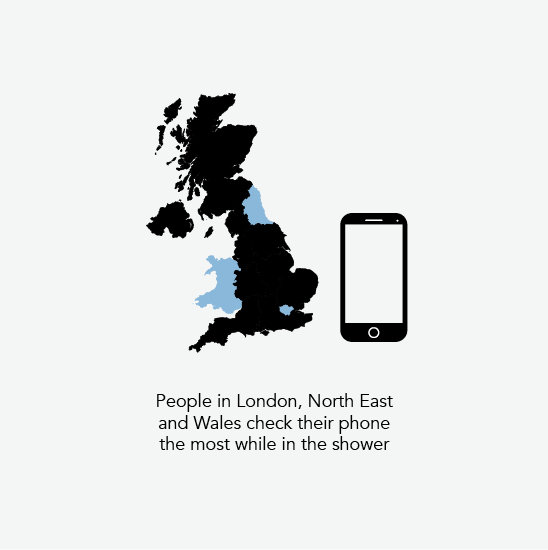 Having a shower is one of the most invigorating ways to get going in the morning or unwind after a long day at work. It gives you some precious “me time” to relax and gather your thoughts. But while you go about your bathroom routine, have you ever wondered whether your shower habits are the same across the country? Do you shower more or less than the average person? And how does your region compare with the rest of the country for cleanliness? On a mission to divulge the UK’s shower habits, we commissioned an online survey with YouGov, which unveiled some surprising results.

And the winner is…

YouGov surveyed over 2,000 UK adults on our behalf, on a quest to discover how often we shower, how long we shower for and what else we do whilst we’re in there. The survey found a big difference between regions, with Wales coming out on top for “cleanliness” (i.e. the region with the largest proportion of adults bathing or showering at least once a day). The land of dramatic scenery and singing excellence now has something else to be proud of, with 72% of its population showering or bathing at least once a day, compared to the UK average of 62%.

While Wales was the clear winner in the shower/bath stakes, the North West and the East of England were joint runners up, with 67% of their adult inhabitants showering or bathing at least once a day. Considering the UK average is 62%, people of Scotland (65%), the South West (66%) and London (66%) join these regions in being above-average shower/bath users. But while these six areas rank as the cleanest in the UK, Yorkshire and The Humber ranked bottom, with less than half of adults (49%) saying they have a shower or bath at least once a day.

The long and short of it

It’s highly likely you’ve never timed yourself in the shower, but the next time you may want to, just to see how you compare with the rest of the UK. The YouGov survey also asked approximately how long people spend in the shower – and the results showed clear differences between the sexes and age groups. Women spend 8 mins on average in the shower, while men spend just 7 mins on average. But neither compares to the amount of time the average 18-24 year-old spends in the shower – a staggering 11 mins 26 secs.

When you look at shower speed across the regions, people in the West Midlands take the longest amount of time – averaging just under 8.5 mins. And those in the East of England are the quickest at an average of 6 mins 35 secs. Remarkably, there are people that spend longer than 30 minutes in the shower – this occurs most often in Wales (4% compared to the UK average of 1%), which is also the UK’s most frequently showering/bathing nation, too.

Multi-tasking in the shower

Quite how someone could spend over half an hour in the shower can only be answered by the individual H2O obsessives themselves, but a clue might be found in the further research YouGov carried out into multi-tasking in the shower. Shaving and listening to music came out on top as extracurricular shower activities, done by 17% and 14% of UK adults respectively, while one in 10 people sing in the shower, and 8% brush their teeth.

Though much of this activity can be put down to effective time management, there are some other shower-bound activities which are less understandable. Proving that nowhere is off limits, 4% of Snapchat users take their phone into the shower (to use for any purpose), while 3% of adults living in London drink during a shower.

Money saving could be a key factor in why people spend so much (or so little) time in the shower, with 16% of people stating either cost or a desire to save water as a reason why they shower for as long as they do. Indeed, these reasons were given by people in the South East (23%) and South West (23%) regions more than any other part of the country¹ – areas whose water suppliers are among the most expensive in the country.

Perhaps it’s because they still live in the parental home or don’t mind the cost, 18-24 year olds are the least concerned about saving money when showering (4%). Just under half (49%) of them say they take this long in the shower because it’s simply how long they need, saying it’s because they find it relaxing (43%). Curiously, 19% of 18-24 year olds say they take the length of time they do in the shower because they “like to escape reality” – by far the largest percentage of all the age groups when asked the same question².

So it seems, like many things, the millennials are leading the way in showering, spending the longest time and getting the most enjoyment out of the bathroom. Now, if only they would hurry up and let someone else get in there…

Mira electric showers are proven to last longer than competitors, so whether you’re in there for 5 minutes or half an hour, you’ll always have the best shower experience possible.

All figures, unless otherwise stated, are from YouGov Plc. Total sample size was 2,061 adults. Fieldwork was undertaken between 19th-20th April 2018. The survey was carried out online. The figures have been weighted and are representative of all UK adults (aged 18+).